Clarence J. Jones was born in 1922 and lived in Corbin, Kentucky.  He attended the Corbin Independent School System. Clarence joined the Army Air Corps.  Clarence trained as a fighter pilot and flew more missions that the typical 50 expected on a tour of duty.  He flew P-38 and P-51 planes and was honored several times for his work.

After one combat mission in May 1944, Clarence was awarded the Distinguished Flying Cross (a very high honor) and was even chosen as an escort for President Roosevelt’s plane when he went to Yalta for a conference with Churchill and Stalin.

Clarence served in combat about five months between January 11, 1944 and June 11, 1944.  He returned home on leave and was assigned to train combat pilots in California.  It was during this work that he was killed.

We were lucky to receive assistance from Clarence's brother John.  Below are his words:

"Clarence voluntarily joined the Army Air Corps (this was before the Air Force was established).  He wanted to be a pilot.  He was fascinated by airplanes.  I remember as a little kid watching him build these very elaborate model airplanes.  He hung some of them from our bedroom ceiling.

After going through boot camp he trained as a fighter pilot at Spence Field in Georgia.  Eventually he was sent to an air base in North Africa from where he flew 53 combat missions over Europe ranging from as far west as France to as far east as Yugoslavia and everywhere in between.

Fifty combat missions were the standard tour of duty for fighter pilots.  He flew P-38 and P-51 planes during his various combat missions.  The P-38 is a beautiful twin fuselage fighter.  It is a very unique plane.  I have attached some pictures and information on the P-38.  You can find more on the internet.

After one combat mission in May 1944, Clarence was awarded the Distinguished Flying Cross.  The citation for that award is included in the attached materials.  On another notable mission Clarence was assigned as an escort for President Roosevelt’s plane when he went to Yalta for a conference with Churchill and Stalin.  While it was an honor to serve as an escort for the President’s plane, it turned out to be a sad experience because while he was gone one of his buddies was killed during a particularly rough mission.

Overall, Clarence served in combat about five months between January 11, 1944 and June 11, 1944, after which he returned home on leave and subsequently was assigned to train future combat pilots in California.  He was killed in an accident during one of those training missions.

Ironically, Clarence was offered an assignment as a bomber pilot in the Pacific (the war against Japan).  My Mother talked him out of it because she thought being a training instructor would be safer.

It is inconceivable for me to imagine the sacrifice made by hundreds of thousands of young people to save the world during World War II, most of them only a few years out of high school.  They are without question the Greatest Generation." 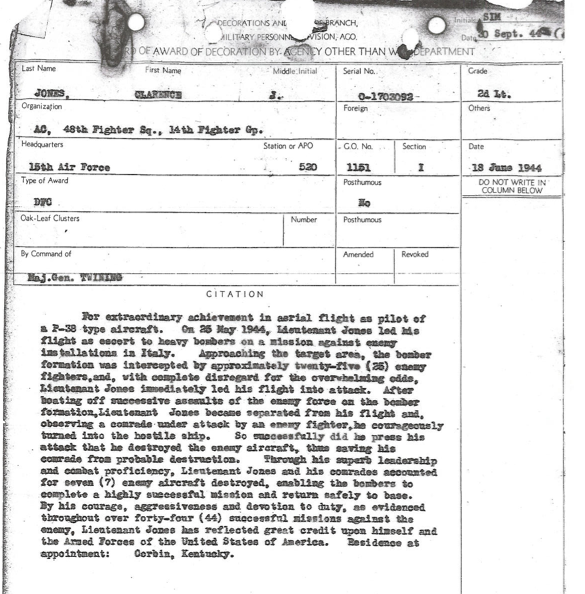 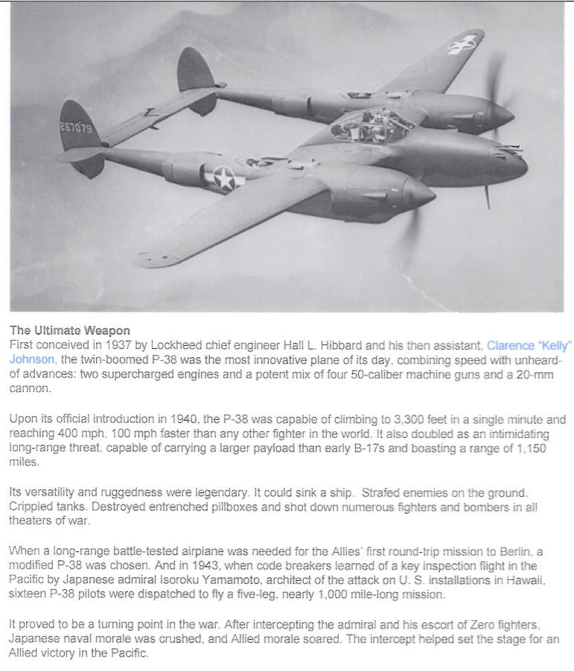 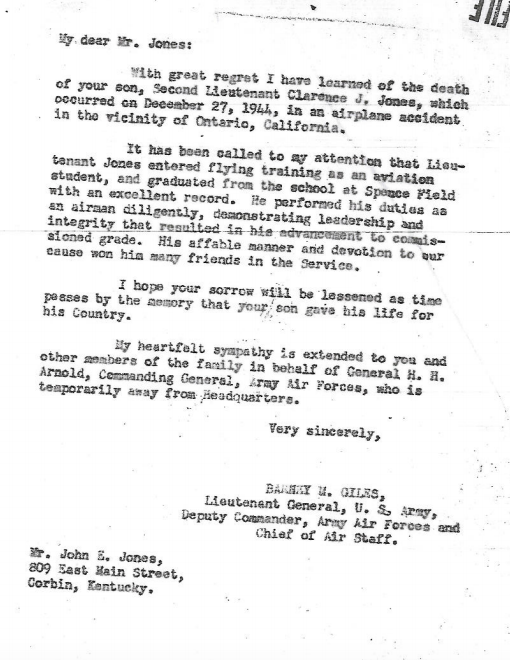 Many thanks to John Jones -brother of Clarence Jones for sharing memories and information .
Cameron A.
Haleigh B.
Austin B.
Camryn W.
7th Grade 2015